The Balagne, in the north-west of Corsica,  and commonly known as the garden of the island, is the best region in which to relax  and enjoy beaches and harbours and also to spend some time in the refreshing mountain area with its old villages which offer a variety of breathtaking views.

Calvi and L'Île Rousse deserve better than being considered merely as the way to the harbour to embark or disembark; they have their own life with their own typical atmosphere and attractions: harbour, citadel and a wonderful location for Calvi, beautiful beaches and squares in the shadow of the sycamores for L'Île Rousse.

Inland, the real Balagne is to be found: a totally different universe with its mountains a few kilometres away from the sea, harbouring eagles’ nests, forests, sparkling clear creeks, freshness....here  you feel it’s possible to leave your favourite beach for a while!

The Balagne is also countryside studded with small mediaeval villages, with above them a maze of narrow “zigzagging” paths which climb the hills and below them the ever-present sea.

During the day a breeze refreshes the air pleasantly and at night-time fresh air comes down from the mountains to cool the hot summer temperatures. 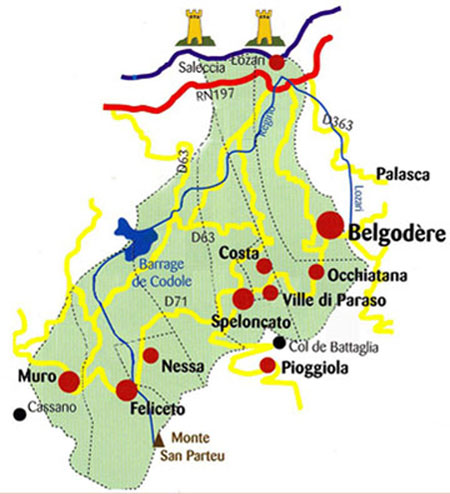 “E Cinque Pieve”, a micro- region with the villages of Belgodere, Occhiatana, Costa, Ville de Paraso, Speloncato, Nessa, Feliceto and Muro making up the new “Community of the municipalities”.

Starting out from Belgodere, the main village above L'Île Rousse, the main D71 road twists and turns along the hillsides and links the different villages all located more or less at the same altitude. (300-400m.)

Before arriving at Costa there’s Occhiatana, built upon the hillside.

Past Costa, the next village along the D71 is Ville de Paraso and above it Speloncato, a village whose name evokes the caves (spelonche)of the area. From Speloncato you can carry on up to the “Col de Battaglia”, the pass over the hills to the next valley of Giussani.

Continuing along the road below, after Ville de Paraso, the road skirts the hills, and passes through villages until it reaches the sea (Lumio) or Calenzana, in the valley of Calvi.

A must is the village of Pigna, a centre for music, theatre and various artists and handicrafts.

Also Sant’Antonino, crowning the top of a hill with a view of 360° is worth a visit.

A short history of Costa:

This village, formerly part of Occhiatana and previously united with Ville de Paraso acquired its independence during the French revolution. Costa has access neither to the valley of the Reginu nor to the forests on the hillsides. Its territory is limited to a mere 108 ha around the village: it’s the smallest village in Balagne.

It numbers around 60 inhabitants whose main income is related to tourism. In the past centuries people in Costa produced sheep and goat milk and cheese, olive oil, wine and chestnuts, as well as renowned varieties of oranges. 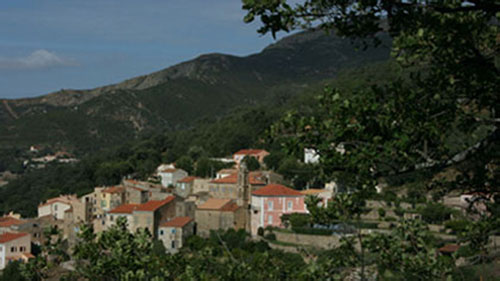 The village lies at 320m above sea level, on the mountainside. About 40 houses are clustered around the San Salvatore church, which was built in the 18th century and possesses a beautiful clock tower in several layers. Inside there’s a statue of San Pasquale in olive wood and a 16th-century painting. The organ has been restored in recent years. Next to the church is the “Confrérie” of Saint Rosaire. Inside one can admire the splendid wooden high backed chairs and also a plaster altar made by a local artist in 1730.

700 m to the southeast of Costa, at 364 m a.s.l. is the old monastery of Tuani, also called San Francescu. The monastery was built in 1494 on or close to the remains of the local parish church by the “Observantins” who handed it over to the “Reccolets”, both belonging to the order of Franciscans.

The monastery was deconsecrated in 1965 and sold to private persons, but the stone church still exists, built upon a natural cave used as a crypt. The first Sunday of May the church welcomes the procession of “Notre Dame de Lourdes” which concludes with a “casse-croute” picnic.

Green hills and rocks mingle in the landscape down to the coast which offers a variety of beaches.

The closest beach is Lozari, a beautiful protected bay which one can see from the terraces in front of the house.

A bit further, but possibly even more beautiful because it is so unspoilt, is the beach “dell’ Ostriconi” from where a path takes you along the coastline through the “Désert des Agriates” all the way to Saint Florent.

The beach in L'Île Rousse is right in the centre of the town, near the main square.

Other worthwhile choices are the beaches of Bodri and Ghjunchitu, just outside L'Île Rousse on the way to Calvi. First you see the entrance to the Camping site, the next small road going downhill takes you to the municipal car park (of Corbara) from where you walk to either one of the beaches.

On  Lozari beach it is possible to do surfing, kite-surfing and sailing.

At Lozari one can go horse- riding on organised tours. Mountain biking and trekking are possible directly from the house.

It’s possible to go for pleasant walks starting from Costa itself along old pathways that run from village to village and are still used by the shepherds.

One can walk, from “Bocca di a Battaglia”, the pass above Speloncato, along mountain ridges in either direction while admiring the Balagne all the way down to the sea.

The highest mountain in Balagne is the “Monte Padru”, 2392 m a.s.l.  It’s possible to climb to the summit if you start out from the “Forêt de Tartagine Melaja”, in the Giussani valley. (not easy)

The information book available in both house and apartment contains several detailed walking tours around the village, at the seaside and also in the mountains.

A suggestion of some day trips to special places outside Balagne: